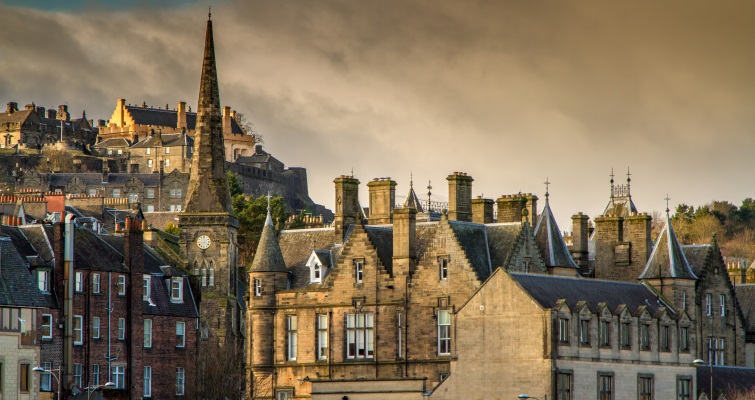 Stirling is a very new city but a city, which also has a very long history.

Awarded city status in 2002 as part of the Queen’s Golden Jubilee, the city has undergone lots of redevelopment. However, it is the ancient heart of the city, clinging to the craggy, rocky slope, which continues to attract visitors aplenty.  And for good reason. The old town itself is a wealth of history and very interesting to walk around, greatly aided by the very helpful information boards.

For many visitors it is the castle which they come to visit. Looking towards the Highlands, it was once one of the most important locations to hold and therefore changed hands between the Scots and English many times. It was because of this important strategic location that Stirling was known to many of Scotland’s heroes down through the years.

The castle itself has undergone extensive restoration showing the accommodation in which the young Mary Queen of Scots would have lived in mid 16th Scotland. Great attention has been paid to the decoration of the palace and much research undertaken to recreate its glorious splendour.

William Wallace and his battle are remembered by the National Wallace Monument and so too is Robert the Bruce with the newly opened Bannockburn Heritage Centre. Stirling really is the heart of Scotland’s Wars of Independence. Bonnie Prince Charlie and his Jacobites paid a visit to the town too before fleeing north to their demise at Culloden. More recent visitors to the area have been the Outlander cast and film crew.  Indeed, hidden within Stirlingshire is the castle which is known to millions as Castle Leoch, and to Monty Python fans in The Holy Grail.

One of the Scotland’s most famous or infamous monarchs was Mary Queen of Scots who spent a lot of her life at Stirling Castle. The castle itself has undergone extensive restoration showing the accommodation in which the young Queen would have lived in mid 16th Scotland. Great attention has been paid to the decoration of the palace and much research undertaken to recreate its glorious splendour.

Stirling is referred to as the Gateway to the Highlands and it is a great area to explore. Excellent transport links mean easy, quick access from Edinburgh and Glasgow and indeed into the Highlands themselves. You therefore can explore cities as well as more scenic rural locations with their stunning lochs, sweeping hillsides and majestic mountains – all on Stirling’s doorstep!