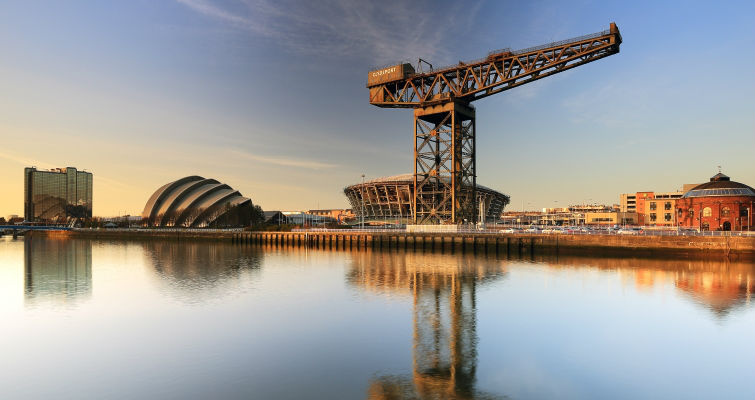 Only eight miles from Glasgow International airport and situated on the banks of the river Clyde, known the world over for its shipbuilding industry this former industrial powerhouse with over ninety public parks has per capita more green spaces than any other city in Europe. Glasgow or “Glas go” means “Green Hollow or Green place”.

The city has much to offer visitors and is easy to get around; the centre is built on a grid system and its major attractions are easily accessible either on foot in a coach or by using the city’s public transport system. This includes the Glasgow Subway, the third oldest in the world, dubbed the “Clockwork Orange” by locals because of the colour of the trains.

Glasgow‘s architecture is predominantly Victorian in style but examples of its Georgian past are still to be seen if you know where to look. The only medieval buildings in the city are its Gothic cathedral and Provand’s Lordship Glasgow’s oldest house dating from 1471. Examples of the work of architect and designer Charles Rennie MacKintosh are to be found throughout the city from Queens cross church, the Willow Tea Rooms and his House for an Art Lover to name but a few. The interiors and furnishings from his house in Glasgow’s west end have been recreated within the Hunterian Art Gallery part of the University of Glasgow.

In 1999 Glasgow was European City of Architecture & Design. Stunning examples of modern architecture can be seen in Norman Foster’s Clyde Auditorium and the SSE Hydro Arena at the Scottish Exhibition and Conference centre beside the river.  Standing on the opposite bank of the river a short walk over The Bells footbridge is the Science centre with lots to interest both children and adults alike.

Also situated on the banks of the Clyde is the Riverside Museum, which is the museum of Transport, designed by the architect Zaha Hadid and voted European Museum of the Year in 2013. The Kelvingrove Art Gallery and Museum is a ten minute walk from the Riverside Museum with its wonderful collection of French Impressionist art, The Scottish colourists, Italian and Dutch including Rembrandt and Dali’s painting Christ of St. John of the Cross purchased in 1952 for the gallery.

Other attractions are the Peoples Palace museum on Glasgow Green, The Gallery of Modern Art and in the beautiful Pollok Park south of the river is to be found Pollok House and the Burrell Collection an eclectic mix of paintings, sculptures and other Objets  d’Art  gifted to the city by Sir William Burrell a former shipping magnate.

The city has a vibrant arts scene, and is one of only nine UNESCO cities of music in the world, and is home to our National Ballet, Opera and Orchestra. There are many festivals taking place throughout the year. Glasgow has played host to the MOBO awards in 2009, 2011 & 2013 and the MTV European music awards in 2014.

Every January sees the three week Celtic connections festival and during the month of June we have the west end festival. For those who love the skirl of the pipes August sees Glasgow host “Piping Live” culminating with the world Pipe Band championships.

Make your visit to Glasgow complete by engaging one of our guides who will show you all the hidden gems which form part of this friendliest of cities.