In past years members of the Scottish Tourist Guides Association have attended the star -studded event across the Pond but the COVID-19 crisis has prevented that.

The event’s origins go back to 1998 when the U.S. Senate declared April 6 to be National Tartan Day to recognize the contributions made by Scottish-Americans to the United States.

The following year the first parade was held when two pipes bands and a small group of Scottish Americans marched from the British Consulate to the UN. Since then the main march has been attended by huge numbers people watching hundreds of pipers and thousands of marchers. The ‘week’ has also extended to anything up to 21 days. 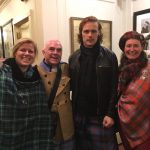 Sadly the event has been cancelled due to the Coronavirus but the organisers have decided to celebrate with a virtual event on April 6. They have called it the first ever Global Virtual Tartan Day.

As a result of the outbreak the 500 members of the STGA are without any work for the foreseeable future so they have decided to help lift spirits both in Scotland and the US where many millions of people have Scottish roots.

STGA chair Linda Arthur said: ‘The Covid-19 crisis has been devastating for the Scottish tourism industry and people all over the world are suffering. We want to help bring a bit of joy back into people’s lives and what better than celebrating Scotland and its famous tartan.’

Kyle Dawson of the National Tartan Day New York Committee said: ‘We are delighted that the Scottish Tourist Guides Association is getting involved in our Global Tartan Day. We want to give them our support in these difficult times just as they are supporting us.’

New York has been particularly badly hit by Covid-19 with a total of 3615 cases recorded on Thursday (March 19).

Here are the social media links we will be using.