Alexander Thomson was an architect who was active in Glasgow around the middle of the 19th century.  As his nickname suggests, he favoured the classical style of architecture, although ‘Greek’ is too narrow a term to define the varied influences on his style.  His buildings contain elements of Egyptian and oriental architecture. 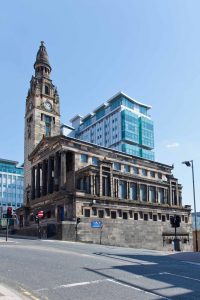 Most of his major buildings are in Glasgow and range from commercial buildings and his only complete remaining church in the town centre to grand terraces in the west of the city and Italianate villas in the south.  He also designed a string of villas along the Clyde estuary for wealthy Glasgow businessmen escaping from the city.

One of his villas in Glasgow, is now in the care of the National Trust for Scotland and the carefully restored interior shows how his interiors complemented his classical exteriors.  Sadly his style went out of fashion, like that of many other architects.  The businessman and collector, Sir William Burrell, who lived at Thomson’s Great Western Terrace, had the original interiors removed in favour of a more fashionable style in the later 19th century.

The church can sometimes be visited on Doors Open Days, or by special arrangement, or of course at Sunday services.

The impressive but somewhat forbidding exterior gives no clue to the wealth of colour inside the building.  The walls and pillars are deep pink with capitals and gallery friezes in gold, blue and pink.  This may symbolise the paradise for the faithful inside. As a staunch Presbyterian, Thomson had no images inside the church but, despite this, the interior is colourful and welcoming.

He was shocked by the resurgence of the Gothic style in the later 19th century and furious when the design of Glasgow University was awarded to the great Gothic architect, George Gilbert Scott.  For Thomson, this was a retrograde step, but the tide of Neo-Gothic architecture, fostered by Ruskin and the Arts and Crafts movement, was too strong to be resisted.

It seems somewhat paradoxical that for Thomson the style of the Christian present and of the future was to be found in pagan Greek temples of the classical past thousands of years earlier.  However for him the eternal values of architecture were to be found in the classical period, not the Gothic.

Thomson was belatedly rediscovered towards the end of the 20th century and has achieved international recognition as an architect.  There are now plaques on his remaining buildings and an Alexander Thomson society.  The resurgence of interest in him has been much fostered by the architectural historian Gavin Stamp.

Thomson never travelled abroad, but a travelling scholarship in his name was founded after his death for students of the Glasgow School of Art.  It was later won by the young Charles Rennie Mackintosh, enabling him to travel to France and Italy.  Mackintosh had little affinity with classical architecture but his travels enabled him to develop his own style – a tenuous link perhaps, but a link nonetheless, to his great mid-century predecessor.