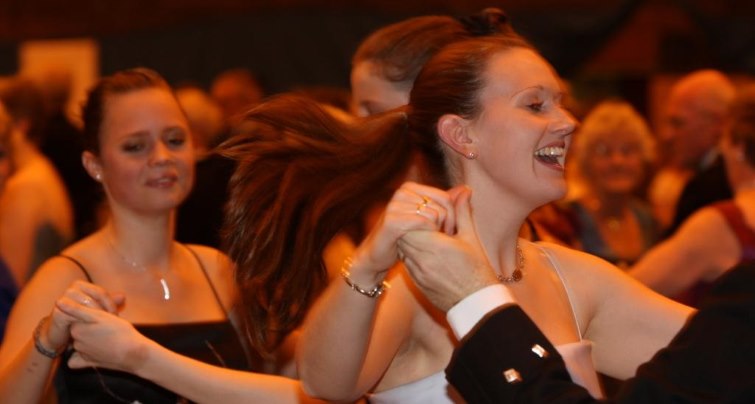 Scottish Country Dances are one of a number of evolutions of Scottish reels.

They have been danced in Scotland since the early years of the eighteenth century. Many commemorate local events or characters, or historical events, and this tradition continues today, with new dances always being devised.

They are not folk dances but are ‘contre-danses’, i.e. dances where the participants dance opposite (French – contre) their partners.  They are performed by a group of couples, usually four, starting in two parallel lines, men facing women, known as a longwise set. Some dances in other formations.

Most dances are progressive, involving two, three or four couples. Each couple in turn becomes the leading couple. Dances are made up of formations arranged in various sequences – with a good grasp of the basic formations a dancer should be able to cope with most dances. A number of steps and formations betray their French roots, e.g. pas de basque, Allemande, Poussette, Promenade.

The Scottish Country Dance Society, now the Royal Scottish Country Dance Society, was formed in 1923 ‘to practise and preserve Country Dances as danced in Scotland’. There are over forty branches of the Society in Scotland, with a similar number south of the Border, three in Northern Ireland and one in Wales.  There are also over seventy branches worldwide.  In addition to the Branches, there are hundreds of ‘affiliated groups’, spread over every continent, plus innumerable unaffiliated groups in school and church and community halls.

The social aspect of Country Dancing is very important. Dancers may meet and dance with many others during the course of an evening, and if they go away from home they should be sure to take with them the phone number of the branch secretary at their destination, and their dance shoes, as there is almost certain to be a chance to dance.