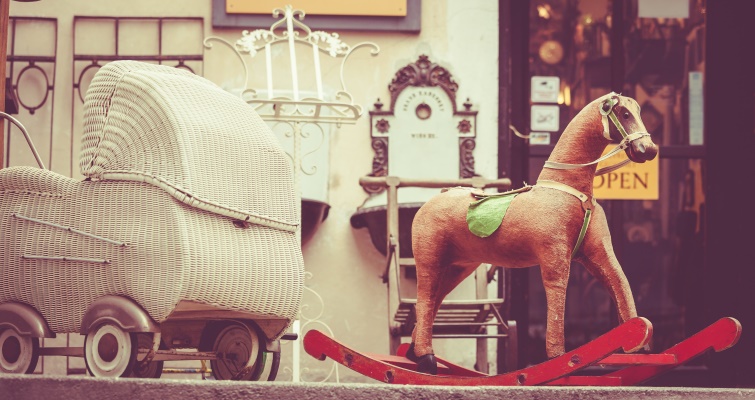 In a country rich in traditions and heritage it’s not surprising that Scotland has an extensive range of antiques from fine porcelain and china to weapons and furniture.

Widely available through independent shops, auction houses and antique centres there’s a style and budget for all manner of collectors.

If you are looking for a simple memento, look out for Mauchline Ware. Produced from 1860 in the Ayrshire town of the same name, this treen product comes in a whole range of shapes and sizes from the common boxes to napkin rings and letter racks and are all printed with a Scottish scene.

Nearby is Cumnock where a pottery produced motto ware with pithy sayings in Scots such as a dish with ‘Dinnae rax (stretch) fur the butter’. Finer ceramics can be found in the wares of Bell’s of Glasgow or the Clyde Pottery of Greenock which come in a wide variety of designs from plates and platters to jugs and bowls. More robust stonewares were produced by Buchan’s at Portobello near Edinburgh whose food containers were emblazoned with the retailers name or the foodstuff inside. In Aberdeen the Seaton pottery produced personalised items in bright dabwares while in Fife was the Wemyss Pottery whose colourful rose designs found particularly their ornamental pigs, were collected by the late Queen Elizabeth the Queen Mother.

Weaponry, most notably swords and pistols can be collected from more specialist dealers with the ultimate collector’s item being the elaborately decorated Highland or Doune pistol. This was the weapon that allegedly fired the first shot of the American Revolution.

A little more genteel is the collecting of watches and clocks with longcase clocks and pocket watches dating from the 1680’s. The most highly elaborate design comes in jewellery and silverware with the Quaich or Friendship cup, a two handled shallow drinking vessel, being a popular collecting item.

Jewellery makers abound, using gold, silver and enamels with Art Nouveau designer Jessie King of Glasgow being particularly noted for her creative work. With the distinctive Scottish yellow/orange gemstone, the Cairngorm, adorning many brooches and pendants, a uniquely Scottish article can be had.

And then there is furniture with William Trotter of Edinburgh being the greatest of the Scottish cabinet makers of the 18th century and a myriad of collectables to enjoy from comics to glass bottles, all reflecting the eclectic nature of Scotland in the past. There’s an antique for everyone!