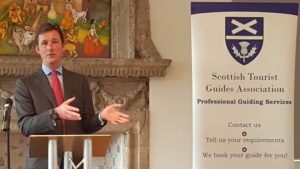 Scotland has 31 new tourist guides to help cater for the growing number of visitors coming north of the border.

This week they received their blue badges from STGA president, The 13th Duke of Argyll, Torquhil Campbell, at Linlithgow Burgh Halls.

The Duke revealed that visitor numbers have grown at his castle from 102,000 in 2016 to 125,000 this year said that Scotland’s tourism industry was in wonderful shape. “It really is so positive and it is so encouraging to hear the statistics about tourism in Scotland,“ he said.

STGA chairman Linda Arthur pointed to the recent Lonely Planet inclusion of the Highlands and Islands in its top 10 Best in Travel destinations. “The demands of our tourism industry are growing at a rapid speed,” she said.

Visitors expect high standards and the Blue Badge qualification provides reassurance to tour operators and travel agents that they are getting the best.

STGA Blue Badge course co-director Alison Reid said it was a brilliant time to be a guide. “We have an increasing amount of business coming in and the season is getting longer as well.”

The STGA has a strong specialism in providing guides with foreign language skills. Languages spoken by some of the new guides include French, Italian and German, Finnish, Russian, Turkish and Chinese mandarin.

The new guides come from a wide range of backgrounds including a photojournalist, a science researcher and an archaeologist.