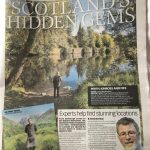 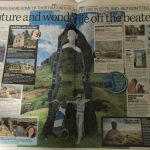 Seventeen members of the Scottish Tourist Guides Association revealed some of their favourite hidden gems in a major three page feature in one of Scotland’s biggest newspapers, the Sunday Mail.

STGA marketing committee chairman, Alasdair Northrop ,co-ordinated the feature which also promoted a new book which tells the history of the association.

The feature was written to coincide with the forthcoming planning re-opening of Scotland to tourists on July 15.

Alasdair Northrop said he was delighted with the feature which perfectly illustrated the attractions of booking a tourist guide when on a vacation.

“Our members know lots of hidden gems off the beaten track,” he said.

“Indeed each one of us have our own collection of jealously guarded little secret places where we take visitors.

“However bearing in mind the current sensitivities in some rural areas because of fears of spreading Covid19 we will be very cautious about where we take visitors.

“We are increasingly conscious about the concerns about overtourism in certain areas and that is very much in the back of our minds.

“At the same time there are many areas of Scotland that are neglected by tourists and deserve more visitors and that was one of the prime motivations for doing the feature with the Sunday Mail.”

Here is a link to the feature. Scotland’s top travel guides on their favourite spots to visit