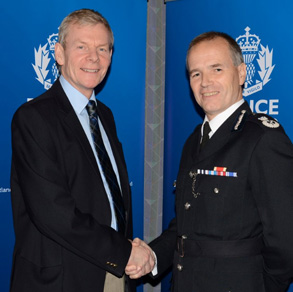 A Blue Badge tourist guide who helped to save the life of a desperate mum who was about to jump from a bridge more than 100 feet above a ravine has received a police commendation for bravery.

Former Royal Navy Commander John Harbour, who recently became a professional tourist guide, was driving across Dean Bridge in Edinburgh when he came across Australian nanny Shadiya Chaib holding on to a woman who was trying to jump.

Eventually they got the woman to safety by pulling her back onto the bridge.

“When she landed, she tried to climb back onto the wall and I had to put her on the deck and get my client to help keep her down, “ said John.

“The police arrived within 10 minutes and this lady continued to try to get us off.

John, 61, received a citation from Sir Stephen House the Chief Constable of Police Scotland which said:“Without your help, the woman could not have been brought back to safety”

John who retired from the navy in 2012, served for a time with Prince Andrew and has also seen service with Prince Charles onboard HM Ships Charybdis and Lewiston a number of years ago.