Discover the pictureque seaside town of St Andrews on this day tour. Learn it is more than just a golf course, enjoy walks on it’s beaches, explore it’s castle and cathedral and indulge in this medieval market town. 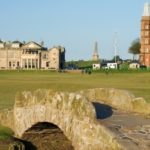 Leave Edinburgh via the A90 north. Stopping at South Queensferry to admire the bridges over the River Forth—the Rail Bridge of 1890 which has UNESCO status, the older (1964) Road Bridge, and the newer (2017) “Queensferry Crossing” bridge.

Queensferry takes its name from Queen, later Saint, Margaret of Scotland who established a ferry here to bring pilgrims to St. Andrews.
Then you enter the Kingdom of Fife and travel north on the M90. The prettiest route is to follow A90 as far as Milnathort then take the A91 to St. Andrews. You will pass Loch Leven where Mary Queen of Scots was imprisoned, the lovely Lomond Hills. Both routes take approx 1 hour 10 mins from the River Forth.

Travel alongside the River Eden estuary and enter the town. Turn left down Links Place to see the famous Old Course Golf course with the Swilken Burn, the Royal and Ancient Clubhouse, the Golf Museum and the fantastic stretch of golden sand of the West Sands beach, where the award-winning movie “Chariots of Fire” was filmed.

Parking is available there.

St Andrews is easy to navigate. There are 3 main parallel streets—North Street, Market Street and South Street. Maps are available from the tourist office in Market Street. Turn left from Links Place into “The Scores “ to reach the ruined Castle which was once the palace of bishops but also a prison containing the infamous bottle dungeon and the unique underground mine.

Both the castle and cathedral are each other. They are also linked in history as well. The reformation in the mid 1500s was a violent struggle between the Protestants and the Catholics that made neither look especially good. A Protestant was burned at the stake for heresy (the spot is marked along one of the streets), the Protestants took the castle by deception and killed the cardinal. The Castle itself was later made a ruin by naval bombardment by the French. Along the way, protestants destroyed much of the artwork in the cathedral and started its swift decline into ruin.

The museum has a fairly simple but actually helpful set of displays on the history of the castle and cathedral. It probably only takes a few minutes to go through it, but it makes everything else make more sense.

Outside, the castle is a ruin, but significant parts are still intact and worth going around. There are also some great views, including a very nice if distant one of the Old Course. The castle itself is very much a ruin. Some parts are somewhat intact, but apart from the views this is far from the most impressive castle in Scotland.

The cathedral of St. Andrews was once the largest in Europe and visited by pilgrims from all over the world. It is a wonder to think Robert The Bruce rode in to the cathedral on it’s inauguration day in 1318! The Reformation saw most of the stones incorporated in to the buildings of the town. As a result, the cathedral today is a magnificent ruin. The grounds and graveyard are free to explore. You pay only if you fancy visiting the museum and climbing St Rule’s tower (160 steps).

Return to Edinburgh on the A917 via the charming east coast fishing villages of Crail, Anstruther, and Pittenweem, joining the A92 at Kirkcaldy.

Hint: Don’t forget the Fish and Chips ! Best in St Andrews is at the Tail End in Market Street.