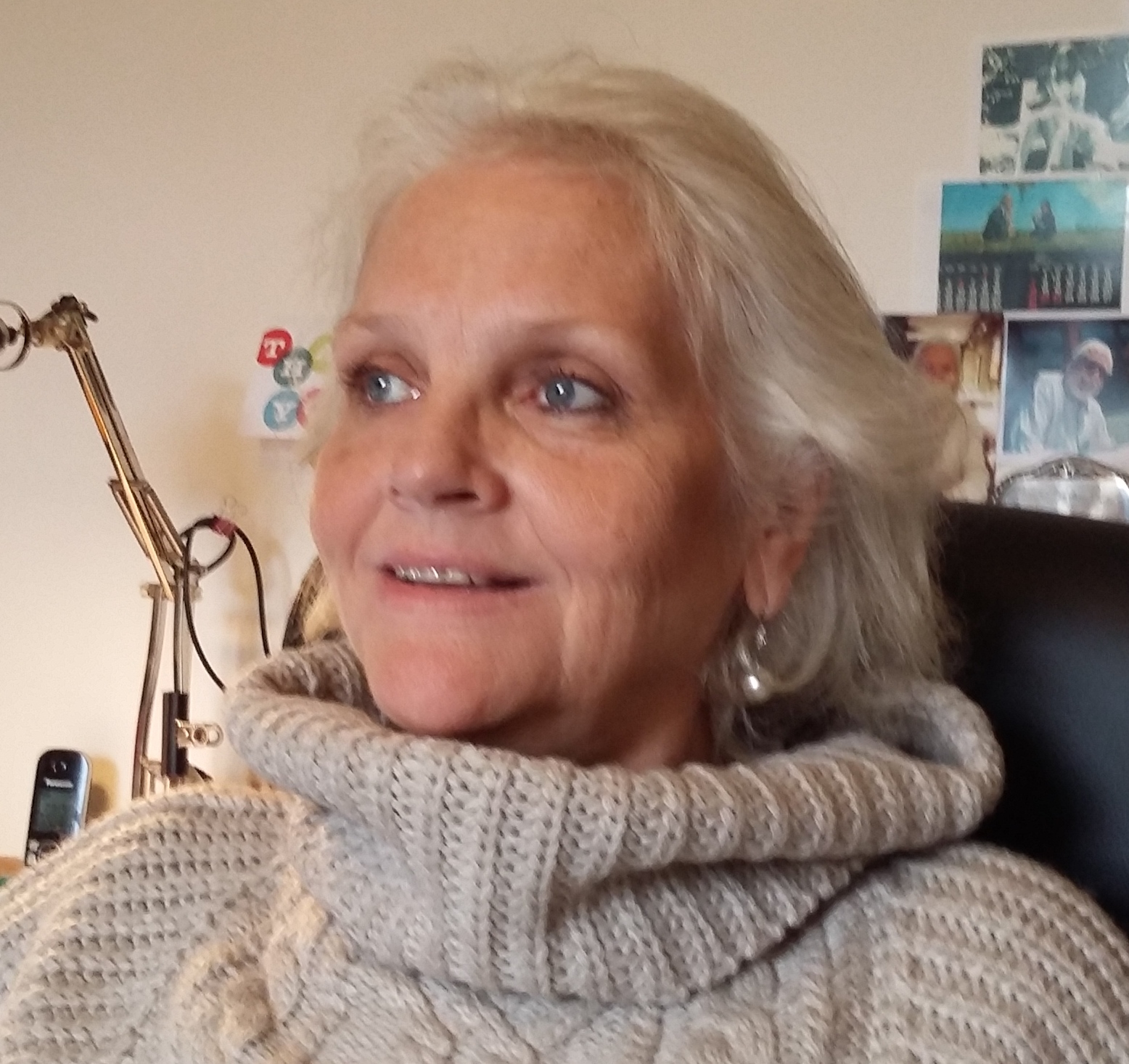 As an accredited STGA Trainer, Mary developed the current Blue Badge Course that trains all fully accredited national guides in Scotland. She has been involved in Scottish Training as Course Director, and previously Deputy Course Director, since 2010. She has also been an accredited Lead International Trainer for the World Federation of Tourist Guide Associations (WFTGA) for the last 8 years, and, since 2009, has been a Trainer for the European Federation of Tourist Guide Associations (FEG).

Mary has trained tourist guides and trainers of guides in Scotland, Brunei, India, Tanzania, Serbia, Azerbaijan, Armenia and Cyprus as a Lead International Trainer. Beyond this, she regularly attends international conferences where she is asked to provide talks, seminars and workshops on a wide range of topics. Accredited to deliver the WFTGA Cruise Guide Endorsement Course, she is also a member of the FEG Training Consultative Group helping to develop new courses and she actively pursues opportunities to continue her professional development as a Trainer.

Mary was raised speaking both Spanish and English and has been an active Blue Badge Guide in both languages since 1999. She has served as Chairman of the STGA Edinburgh Branch and as a Director on the STGA Executive Board. During her vast years of experience as a Trainer for the STGA, she has also been a Mentor, with experience as an Assessor, Facilitator and Lecturer for the Blue Badge, Green Badge and Yellow Badge courses. 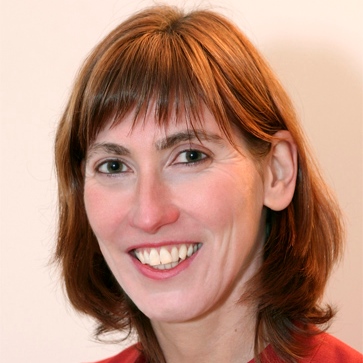 Since qualifying with the Scottish Tourist Guides Association in 2002, Viola has served on the Glasgow Branch Committee, the Board of Directors and as Training Manager, shaping and implementing policies and strategies in tourist guide training and accreditation. She is currently the Convener of the FEG Training Consultative Group.

Over the years she has trained tourist guides and trainers of tourist guides in Armenia, Brunei, Cyprus, Singapore, Scotland and delivers various workshops and seminars at international conferences. She worked as a trainer in the cruise industry and, being accredited to deliver the WFTGA Cruise Guide Endorsement Course, delivered it in Orkney, Shetland and central Scotland.

In Scotland she is mainly developing and delivering training courses, at different levels, for site guides in regeneration areas and occasionally assists with the Blue Badge Guide Training Course as Tutor, Assessor and Moderator.

Her latest efforts centre around assisting FEG in rolling out the T-GUIDE Project – a CPD course for tourist guides on guiding people with learning difficulties. 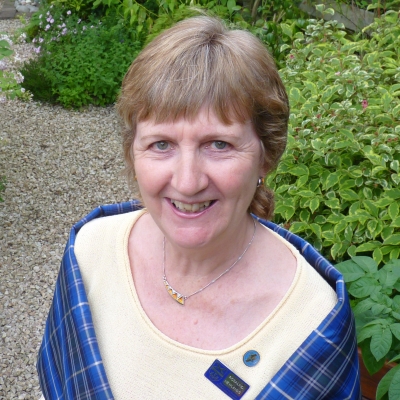 Rosalind qualified as a Scottish Tourist Guide in 1983 and has served on the STGA Board.  Rosalind has delivered tourism, tourist guide and management training both in Scotland and overseas. In Scotland she worked with the National Trust for Scotland, the Association of Visitor Attractions VisitScotland and public bodies in Scotland. She developed and delivered customer care and tourism management courses as well as guide training for Scottish visitor attractions  She initiated the new STGA Green and Yellow Badge training and developed the STGA Blue Badge Training course from 1995.  Rosalind was Course Director for the Scottish Blue Badge Training Course from 1989-2011, developing the training to include some distance learning and writing 13 Regional Studies workbooks for trainee tourist guides in Scotland. She developed the STGA Communications Seminar, known as Guiding is Fun and gifted the copyright of that course to STGA in 2011. Rosalind was a consultant for the setting up of the Institute of Tourist Guiding in London and was one of the UK Experts for the development of EN15565 Training and Qualifications for Tourist Guides. She also developed the Federation of European  Tourist Guides (FEG) programme, “The Way Foward”  Internationally Rosalind has acted as a consultant for projects in  Albania, Indonesia, Singapore and the United Arab Emirates.

Rosalind  joined the World Federation of Tourist Guides Executive Board  in 2004 and was appointed Head of Training; in 2005 she was elected Vice President and in 2007 as President, serving as President until 2013. She developed the WFTGA Hands On Training and Train the Trainer Courses with the support of WFTGA Trainers – this included rolling out the WFTGA training programme worldwide.  She was a member of the UNWTO Silk Road Task Force and has developed a Handbook for Silk Road Heritage Guides in cooperation with WFTGA, UNWTO and UNESCO. Rosalind was President of WFTGA from 2007-2013. She was awarded an OBE for Services to Tourism in 2012. Rosalind was appointed as a WFTGA Lead International Trainer in 2014 and in 2016, she delivered the first WFTGA Train the Trainer Course in Scotland. 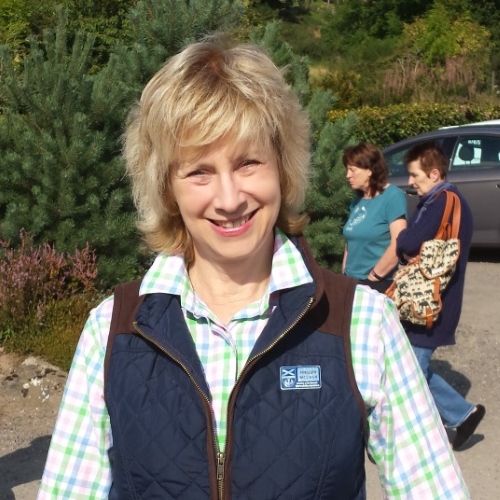 My training career with STGA began in 2007 when I was invited to be Joint Trainer/Mentor for a specialist one-year Green Badge course, designed specifically for the emerging markets from Russia and China.  The Scottish Government provided 50% of fees to encourage Russian/Mandarin/Hungarian Guides in Scotland.

The following year in 2008, I began as a Mentor for the Blue Badge course and have been a Mentor ever since.  I take great pleasure in helping trainees develop their skills and knowledge base during their STGA training journey.

In 2016, I successfully completed Part I of the World Federation of Tourist Guide Associations (WFTGA) training to become an accredited WFTGA National Trainer. More recently I was appointed as Principal Mentor for the 2016 Blue Badge Course.

I have successfully completed the Assessors’ course and also have my GIF accreditation. 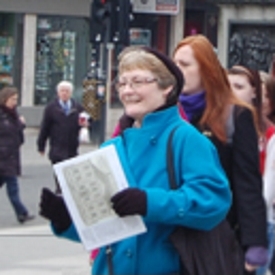 After teaching French and German for over 20 years, many of them as a Principal Teacher, I took a year out and studied at Glasgow Caledonian University for a Post Graduate Diploma in Tourism Management. Shortly thereafter, a chance encounter in a school staff-room led me to train as a tourist guide, qualifying in 2000. I continued to teach for several years, guiding only in the summer, then in 2008 made the decision to concentrate on guiding, working mainly with groups from France and Germany.

In due course I trained to become an STGA trainer, later adding the qualification to train the Guiding is Fun module. I have participated in a number of training exercises since then: I have presented Guiding is Fun on more than one occasion, and have also assisted in the training of Yellow Badge Guides in Paisley; I am currently a joint Course Director on the 2016-2018 Blue Badge Course. I hope to explore other aspects of training/assessment in the future. 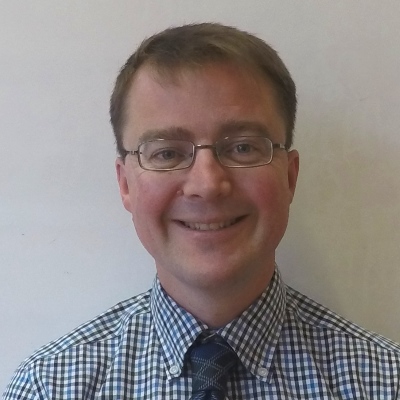 I have been a Tourist Guide since 1995 and started gaining my STGA qualifications in 2006. Whilst still a Green Badge guide I became an accredited trainer with the STGA. In 2008 I started as a tutor on the Blue Badge course, teaching the natural history section of the course and I continue to do so. Around this time I also started running wildlife CPD events for existing Blue Badge guides and these have proved to be very popular. With some encouragement I started the Blue Badge course myself in 2013 and qualified in 2014. Recently I was successful in being selected as one of the 5 mentors on the 2016-18 Blue Badge Course.

Outside of the STGA I have run guide training courses for several organisations and I became an accredited Certified Interpretive Guide Trainer with the National Association of Interpretation in 2011. I have a long term involvement (since 2007) in the annual Ranger training programme at Aigas Field Centre, where my guiding career began. 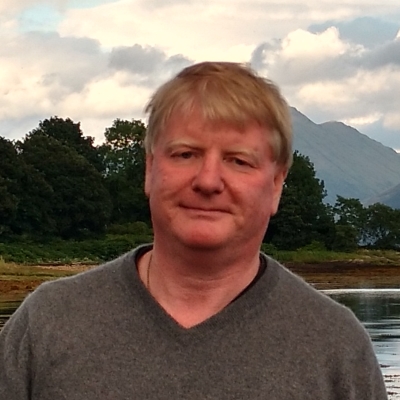 I started tour guiding in 2010 by participating in a one-year Green Badge course run for Chinese or Russian speakers. My wife was already a Blue Badge Russian-speaking guide and I wanted to devolop my interest in Scottish history and culture and also use my Russian language skills.

After that I progessed to the Blue Badge course. I learned so much more than I would have thought possible through the courses. You are constantly learning when you are guiding. I found I had to work hard to develop my Russian language skills, not being a native speaker. The level of spoken language skill necessary for guiding is much higher than that needed for everyday communication.

I do a mixture of extended tours, cruise guiding and driver guiding. I love the variety and unpredicable nature of the work. You can be working with one person or fifty. It is a pleasure to travel throughout Scotland also to meet so many interesting people. I am also a volunteer guide in Glasgow Cathedral.

In 2016, I successfully completed Part I of the World Federation of Tourist Guide Associations (WFTGA) training to become an accredited WFTGA National Trainer and the STGA ‘Train the Trainer’ course. Recently I was appointed as a Mentor for the 2016 Blue Badge Course. I am looking forwards to the upcoming Blue Badge Course and to completing the World Federation training. 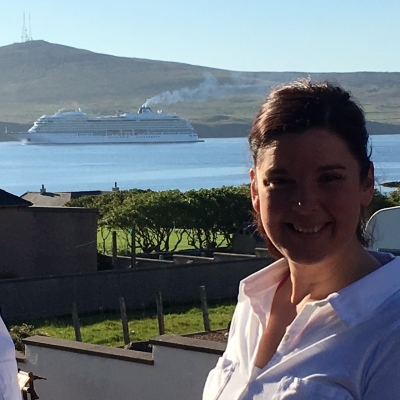 After qualifying as an STGA guide in 2004, Helen worked as both a tourist guide and operationally within the cruise ship industry.

In 2005 she qualified as an STGA Trainer and has been heavily involved in guide training in Orkney since then. She acted as a course director for an STGA Yellow Badge course in 2009 and has been the Course Director for 2 subsequent STGA Green Badge courses within the islands. She is also accredited to deliver the Guiding is Fun unit and is a Green Badge Assessor.

Helen is currently the Operations Manager for the Orkney Office of Excursions Ltd and works closely with guides and cruise ships across Scotland handling around 180 port calls per season. 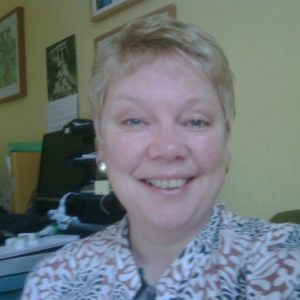 My training career started back in 1980 when, after 7 years of teaching in secondary education, I decided to work training with community groups in Norwich. What followed were many years of working with a wide variety of groups offering training on health education issues, with ethnic minority groups, and confidence building. I moved to Glasgow in 1985 and continued to develop my training skills by becoming accredited in training for cognitive psychology (STEPS Pacific Institute) and early business skills with Scottish enterprise (Micro Credit and business start-up). For 10 years I also ran my own knitwear business and carried out 40 presentations a year about the inspiration for the knitwear designs and Scottish social history.

I worked for East Renfrewshire Council as a manager of a project helping long term unemployed people return to work before finally seeing the light and leaping into STGA Blue Badge training qualifying in 2012!

After a few years guiding I made the decision to put all these skills to use and qualified as an STGA Trainer in March 2016. I also qualified as an assessor for STGA guide assessments and will act as a mentor for the 2016-18 new group of STGA Blue Badge students.

I have served on STGA Board of Directors for over a year now and I currently hold the position of Vice Chairperson and Chair of the Training committee.