Celebrating Scotland’s diverse history is what we Scottish Tourist Guides do best!
And with the aim of not confining certain groups’ stories to particular days or months of the year, here is a glimpse into some of LGBTQ+ Scotland’s history.

If you would like to find out more, there are a number of our guides who offer LGBTQ+ Scotland tours of their own cities and across the country. To book, contact them directly through their profile pages:
Ross Tillbrook; Hannah MacKay Tait; Marina Edwards-Scott; Seth Ewin; Brian Hay; Kirsten Griew; Bruce Cochran 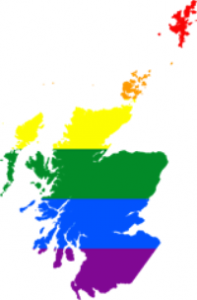 Go back less than 100 years and it becomes impossible to definitively identify the majority of people who, were they alive today, might place themselves within the LGBTQ+ community. The ways of expressing these aspects of their identity did not exist, and those who fell outside the accepted ideas of gender and love might not have understood their feelings, perhaps choosing to ignore them and almost certainly choosing to hide them. In other cases, their stories were more deliberately concealed by those who kept the official records.
We will never know the full extent of our queer history, however, there are some individuals we can look at and read between the lines, to find intriguing stories of love and self-expression that defied the odds.

Here, our guides tell us of people, places and events from Scotland’s diverse past and present that particularly inspire or fascinate them.

Ross: ‘During the age of Empire, Major General Hector MacDonald (also known as Fighting Mac) was one of Scotland’s greatest military heroes. That was until rumours about his sexuality ruined his reputation and resulted in his untimely death. He is buried in Edinburgh’s Dean Cemetery, the location marked by a beautiful memorial often highlighted with a ribbon of tartan and sprig of heather.’

Hannah: ‘One of Scotland’s most prolific and exciting modern playwrights, Jo Clifford was born in England and made Edinburgh her home. An adaptation of Great Expectations in 2012 saw her become the first openly trans writer to have a play in London’s West End. Since then she’s been most famous for her work exploring her trans identity. Her gently radical, life-affirming show The Gospel According to Jesus, Queen of Heaven, written and performed by Jo herself, has been staged hundreds of times around the world. Jo Clifford is a giant of Scottish theatre and a shining example of how Scotland’s LGBTQ+ history is still being written, every single day.’

Seth: ‘“Sssnnnwhuffffll?” opens Edwin Morgan’s ‘The Loch Ness Monster’s Song’. A hilarious collection of sounds which needs to be read to be appreciated.
His poetry can be funny but also deadly serious, dealing with poverty and violence in his lifelong home Glasgow. On his death, aged 90 in 2010, Morgan was the last surviving member of the canonical ‘Big Seven’.
His moving love poems stayed neutral in terms of gender, but in 1990 he wrote publicly about his sexuality, a few years later opening Glasgow’s LGBT Centre.
As Scotland’s first official Makar (poet laureate) his specifically commissioned poem opened the new Scottish Parliament Building.’

Bruce: ‘My home city of Glasgow is rich in LGBTQ+ culture. For example, Glasgow is home to Scotland’s only LGBTQIA+ bookshop “Category is Books” based on the city’s Southside. There are only two other queer bookshops in the UK, in London and York. Glasgow Women’s Library is based in the Bridgeton area of the city just east of the city centre and includes the Lesbian Archive.
John Barrowman actor, singer and presenter was born in the Mount Vernon area of the city before moving to the USA with his family. It is the birthplace and was for many years home to the actor and TV personality Stanley Baxter until he moved to London, where he still lives.’

Kirsten: ‘It is shocking that, had he been born, in 1790, with the male body that would surely have been a better match with his soul, and had his parents been married, Walter Sholto Douglas would have stood to inherit an earldom, royal patronage and one of the largest fortunes in Scotland. As it was, he was forced to move to Paris to live freely as a man, dying young and alone in a debtors’ prison.’

Marina: ‘James VI of Scotland/I of England is our most famous gay king. The son of Mary Queen of Scots and Lord Darnley (also said to have had male lovers) became King of Scots in 1567 at 13 months old, and inherited the English throne, after waiting decades, in 1603. James, in the Royal court at least, was unashamed of his love for men, despite having a wife and children. People joked about the King being a Queen. He publically kissed and hugged his male lovers, showered them with rank and honour, and called the last of them his ‘wife’. He seemed not to be closeted.’

‘Homosexuality had been illegal since 1533. Hypocritically, James wrote to all judges in 1604 to remind them to punish sodomy with death! He was a religious man, ordering a new version of the bible in English, one that defined Presbyterianism for centuries. Over the years many gay men were persecuted and capital punishment for homosexuality lasted in the UK until 1861, when it was commuted to 10 years in jail. Male homosexuality was not decriminalised here until 1980. On March 29 2014 gay marriages became legal both in Scotland and England, and was the date of my own big fat gay wedding!’

Ross: ‘At a time when sex between men was still illegal in Scotland the centre of Edinburgh’s gay nightlife was not located off the beaten track but was a club located on the main shopping thoroughfare, Princes Street. Fire Island operated for 10 years on the site of where Waterstones bookshop now stands and in the 1980s was named by The Face Magazine as one of the top 50 clubs in the world.’

Hannah: ‘Sophia Jex-Blake is one of my favourite people from Edinburgh’s history. She was a tireless campaigner for women’s education and the leader of the “Edinburgh Seven”, who in 1869 became the first women to matriculate at the university’s medical school (or, indeed, at any UK university!)
Denied the right to graduate, Jex-Blake went on to qualify in Switzerland and returned to Edinburgh as the city’s first woman doctor. In the 1880s she met Margaret Todd, a doctor and author who became her lifelong partner. The two women lived together in Bruntsfield, where they ran a women’s hospital, before retiring together to Sussex in 1899.’

Seth: ‘With the most expressive face in Scottish Comedy and the archetype of Glasgow wit, it is no surprise that Karen Dunbar went from roles in BBC Scotland’s popular Chewin’ the Fat to the star of The Karen Dunbar Show, or that she continues to perform in panto at the Kings Theatre and in National Theatre of Scotland productions. What many may not know is that she cut her teeth in the ’90s as a karaoke host and DJ on the Glasgow and Edinburgh LGBTQ+ scene.
In 2014 she was co-compère of the Glasgow Commonwealth Games opening ceremony.’

Kirsten: ‘The thing I love most about Flora Murray, who came from south west Scotland, even more than her pioneering and courageous work as a doctor treating women harmed in the cause of suffrage, poor children in London and running a World War I military hospital in Paris; I love that she and Englishwoman Dr Louisa Garrett Anderson, with whom she ran the hospital, were openly in a relationship and that they are buried together with a stone that reads ‘We have been gloriously happy.’

Look out for our tours for Edinburgh Pride in June 2021.