Home » Top 10 Scottish castles to visit Scotland is famous for its many castles, ranging from the palatial and stately – some still inhabited by their owners – to remote, romantic ruins by the sea. Blue Badge Guide David Tucker selects ten Scottish castles open to visitors. Each carries its own unique story and they all offer the drama of ancient buildings created many centuries ago as defensive fortresses.

“Defence was often needed against military attack – often by the English, of course! – but also against predatory neighbouring tribes or, uniquely to Scotland, other clans. The powerful, extended families known as ‘clans‘ were not only local, armed forces; their chiefs also inherited the aristocratic titles granted by monarchs and governments across Britain. Many castles still bear the prefix ‘dun-‘, meaning
fortress.

Peace between Scotland and England, the ‘auld enemy’, arrived in stages after the Union of the Crowns in 1603, the Union of Parliaments in 1707, and the final suppression (at the Battle of Culloden in 1746) of the Jacobites, whose rebellion aimed at restoring the Stuart dynasty to the British throne.

After 1746, noble families were able to transform their bleak, defensive fortresses into stately homes or palaces offering comfort and luxurious living. Most of these were opened to the public during the 20th century and now form a cornerstone of Scottish tourism.

This list of ten castles is, of course, a subjective one, but it has been chosen to reflect geographical and historic diversity, with the emphasis on unique features. To avoid ranking them, the castles are presented in alphabetical order. The owner of each is shown in brackets (see Visiting Notes, below). 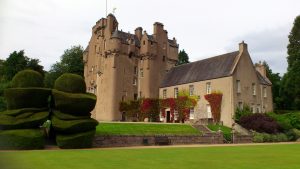