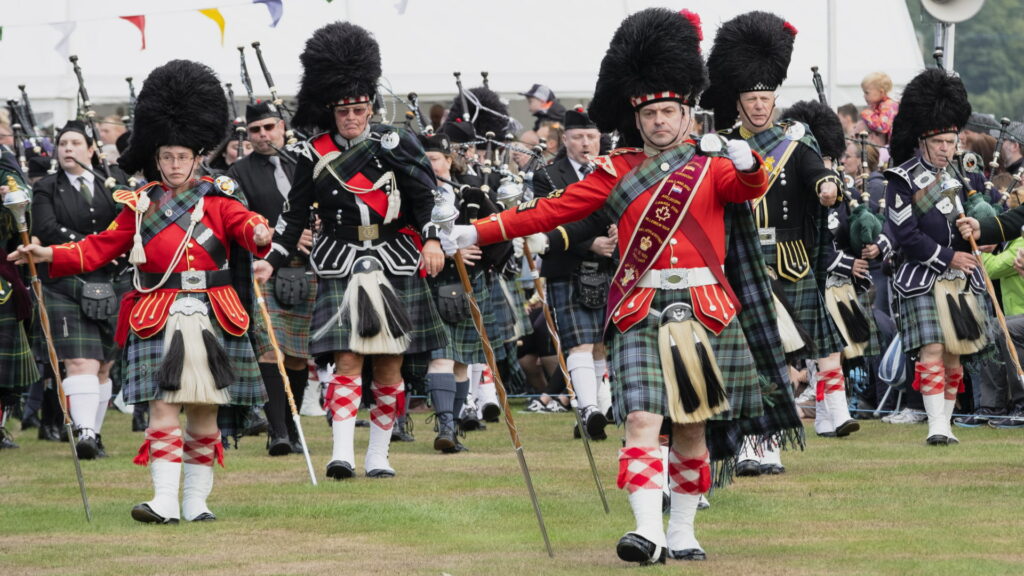 Tartan Day is a North American celebration of Scottish heritage on 6 April, the date on which the Declaration of Arbroath was signed in 1320. It originated in Canada in the mid-1980s and then spread to other communities of the Scottish diaspora in the 1990s. In Australia the similar International Tartan Day is held on 1 July, the anniversary of the repeal of the 1747 Act of Proscription that banned the wearing of tartan. Tartan Days typically have parades of pipe bands, Highland dancing and other Scottish-themed events.

Tartan in Scottish Gaelic breacan, speckled, is a patterned cloth consisting of criss-crossed, horizontal and vertical bands in multiple colours. Tartan is made with alternating bands of coloured threads woven as both warp and weft at right angles to each other. This forms visible diagonal lines where different colours cross, which give the appearance of new colours blended from the original ones. The resulting blocks of colour repeat vertically and horizontally in a distinctive pattern of squares and lines known as a sett.

Although today tartan is mostly associated with Scotland, the earliest evidence of tartan is found far afield. Tartan-like leggings were found on the “Cherchen Man”, a 3,000 year-old mummy found in the Taklamakan Desert. Similar finds have been made in central Europe and Scandinavia. The Hallstatt culture which has been linked with the Celtic populations and flourished between the 8th and 6th centuries BC, produced tartan-like textiles. The earliest tartan in Britain, the “Falkirk” tartan, dating from the 3rd century AD, was uncovered near the Antonine Wall . It is a simple check design, of natural light and dark wool.

Martin Martin, wrote in 1703 that tartans could be used to distinguish the inhabitants of different regions of Gaelic Scotland. He said that the inhabitants of various islands and the mainland of the Highlands wore cloth in which the setts and colours varied regionally.
Patterns were loosely associated with the weavers of a particular area and it was not uncommon for a number of different tartans to be worn at the same time. The use of a special pattern by each family, is a modern distinction.

Nonetheless, such territorial patterns became associated with the dominant clan: A 1587 charter granted to Hector Maclean of Duart on Mull required him to pay an annual duty of some 70 metres of cloth of white, black and green colours. The same pattern is worn by Macleans to this day. At the Battle of Killiecrankie in 1689 the Jacobite army had “McDonnell’s men in their triple stripes”. The process of formal ascription to names began in 1725 when the recruits of the Highland Independent Companies were clothed in a standardised tartan with Argyllshire associations now known as the’ Black Watch’. A similar process led to the development of a modified Lochaber tartan into that worn by the Cameron Highlanders.

In 1747, the government, recognising the semiotic power of tartan, banned its use, other than in the army, until 1782. Its increasing popularity was given royal approval when King George IV briefly wore a tartan kilt during his visit to Edinburgh in 1822. What was once a cloth associated with Gaelic Scotland has become the symbolic national dress of Scotland.
So today there is no reason people of non-Scottish heritage cannot join in the fun of Tartan Day. Whether it be a scarf, skirt or even a kilt, show your love for the fabric that never goes out of fashion by using it in your outfit.