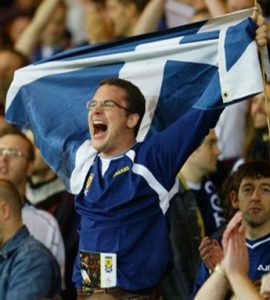 Scotland’s men’s team qualified for Euro 2020*, the international football tournament featuring Europe’s top teams. Their their kick-off is set for 14th June 2021 against the Czech Republic, to be played at Hampden Park, Glasgow.

This will be the first major football tournament featuring the Scottish men’s team for over 20 years. Qualification for Euro 2020 is significant for other reasons: some of the matches will be played in Glasgow and the ‘draw’ has ironically put Scotland into the same qualifying group as the ‘auld enemy’, England. These traditional rivals will meet at Wembley Stadium, London, on 18th June.

The fans of the 24 European countries involved were desperately hoping that ‘lockdown’ eased up so they could attend matches at one of the 12 stadiums involved. That certainly applies to Scotland’s ‘Tartan Army’ fans who have a long tradition of adding boisterous colour – kilts and bagpipes! – to stadiums around Europe.

In football’s domestic club competition, the Scottish Premier League, there was a change at the top in 2020/21 with Glasgow Rangers winning the league for the first time in many years. Their ‘old firm’ rivals, Celtic (also based in Glasgow), had won the title for the nine previous years. Perth’s club, St Johnstone, also had a great season, winning both knock-out ‘cup’ competitions.

Although STGA guides may not be football fans themselves, they can arrange for visitors to attend matches or, at least, point the way to the largest stadiums, all of which offer stadium tours. Aside from Glasgow’s Hampden, Celtic Park and Ibrox (Rangers), these include Easter Road (Hibernian) and Tynecastle (Heart of Midlothian) in Edinburgh and Pittodrie in Aberdeen, while the Caledonian Stadium, home of Inverness Caledonian Thistle FC, is a familiar sight when crossing the Kessock Bridge in the Highlands (pic below) 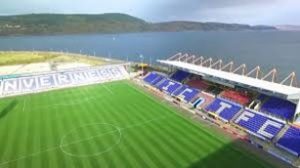 Note: ‘Scotland’s men’s team’ is specified for good reason in this blog. Women’s football participation has increased exponentially over the years; the Scottish national women’s team competed in the European tournament in 2017 and the World Cup in 2019