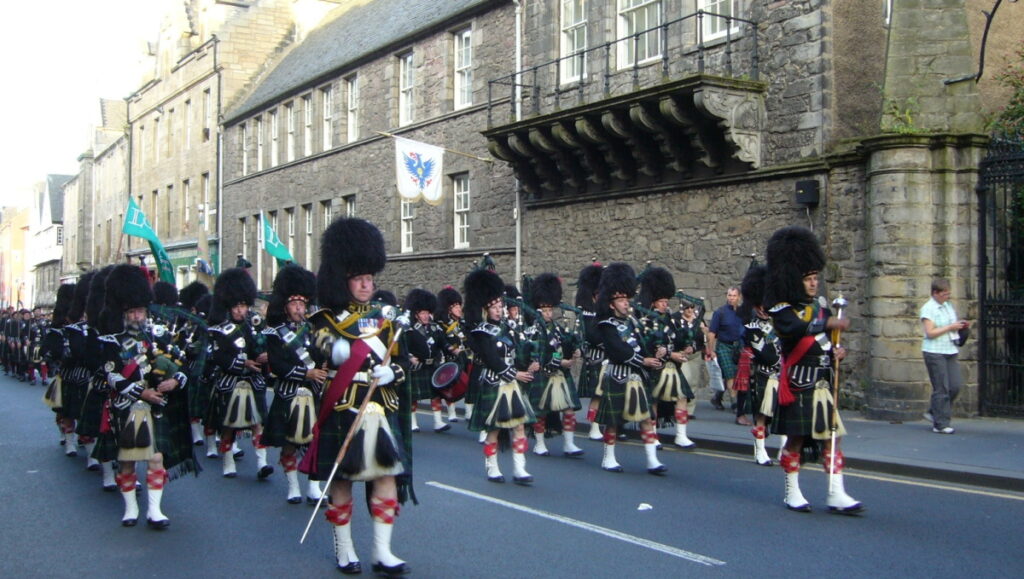 The 10th of March has been chosen by The Bagpipe Society to be a day to celebrate the world’s bagpipes and piping traditions when, since 2012, on International Bagpipe Day – Great Bagpipe Convergence – pipers anywhere are invited to go out at noon local time, play their pipes, and then post a photo or video on the Society Facebook page. The Society was formed in 1986 to bring together players, makers, researchers and those who love the bagpipes. It seeks to inform people about the social and cultural history of the diversity of bagpipes played today and encourages them to take up the instrument.

In Scotland, the origin of Bagpipes is unclear with various claims as to their One view is that they originated in the Middle East whereas others claim that the Romans introduced the instrument to Britain. But it cannot be denied that the Bagpipes were adopted by the Gàidheal, the Gaelic-speaking peoples of the nation who gave them the distinctive music and idiom of Scotland’s national musical instrument. There are many ancient legends and stories about bagpipes which were passed down through minstrels and oral tradition. The first written evidence for Scottish bagpipes is in accounts of the Battle of the North Inch of Perth of 1396 that record “warpipes” being carried into battle. These were most likely a’ phìob mhòr, Gaelic for the Great Highland bagpipe. Thus the earliest references to bagpipes in Scotland are in a military context, and it is in that context that the Great Highland bagpipe became established in the British military and achieved the widespread prominence it enjoys today.

The Scottish Gaelic word pìobaireachd, pipe music, has been adapted into English as pibroch which refers now to Ceòl mòr, the great music of the Great bagpipe which is the pinnacle of composition. Having displaced the harp in lordly halls, the pipers adopted and developed that repertoire. But ceòl beag, light music, such as marches and dance tunes was widely composed and played.
Ceòl mòr consists of an ùrlar, ground, a slow movement with a simple theme, then a series of increasingly complex variations on this theme, and ends with a return to the ground. Ceòl beag includes marches, strathspeys, reels, hornpipes, and jigs, slow airs, and more. The ceòl mòr style was developed by dynasties of bagpipers, the MacArthurs, MacGregors, Rankins, and especially the MacCrimmon family in Skye, who were hereditary Pipers to the Chiefs of MacLeod between 1600 and 1825 and who ran a College of Piping at Borreraig in Skye from around 1670.

Followingg the failure of the last Jacobite Rising in 1746, a badlly rattled Hanoverian government launched a vicious attack on the Gàidheals and their culture, the bagpipe included. However, the Act of Proscription 1746 did not ban the Highland bagpipes. Nonetheless, the destruction of the clan chief’s power and patronage and widespread emigration of a disposed people did contribute to its general decline. It was within the British Army that the traditions survived. a number of regiments were raised from the Highlands over the second half of the eighteenth century and there is evidence that these regiments had pipers at an early stage Between 1740 and 1840 it was customary for Highland Chiefs who raised Regiments to take their personal Piper with them but it was not until 1854 that Pipers were recognised officially by the then War Office. There are many accounts of pipers playing into battle during the 19th century, a practice which continued into World War I when it was abandoned after the early battles, which took the lives of over 500 pipers.

These strong links between Bagpipe music, Pipe Bands and the British Army remain with the Scottish Regiments playing a major role in the development of Pipe Bands. These Army Pipe Bands developed around the mid-1800s, when regimental Pipers and Drummers would play together on long route marches in order to keep a steady tempo and maintain the morale of the troops. The Head Piper became known as the Pipe Major. As the British Empire expanded, so its Scottish troops travelled the world taking with them their national music. Scots who emigrated to the New World and beyond also effectively spread Gaelic culture and traditional Scottish music around the world. All this contributed to generating the strong interest in Piping and Pipe Band music which exists worldwide today.

The World Pipe Band Championship, a competition, held over two days in August perhaps best exemplifies that interest. These Championships have been staged since 1947 although the top Grade Pipe Band Competition winners at the annual Cowal Highland Gathering were recognised as World Champions in 1906. When the competition was last held in 2019, 195 Pipe Bands brought around 8000 pipers and drummers to Glasgow Green. Over 30,000 people attended the event. The bands come from all over the world although most are from the United Kingdom. The title of World Champion is highly coveted, and this event is the culmination of a year of preparation, rehearsal and practice. Inveraray & District Pipe bad were the overall champions. It is hoped to hold the event this year.